Speech to the House of Commons Debating Group 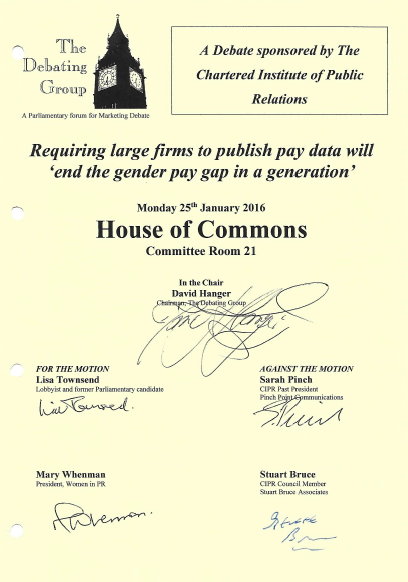 The Chartered Institute of Public Relations is a sponsor of the House of Commons Debating Group. On Monday 25th January, I was asked to oppose the motion: ‘Requiring large firms to publish pay data will end the gender pay gap in a generation’.

On the day that the government will announce its consultation, I thought it would be worth publishing my speech in full.  I hope you find it interesting and it encourages you to do what you can to ensure there is pay parity where you work.

Introduction
I am 43 years old.  Three years before I was born, the equal pay act was introduced.
It should be an embarrassment to British business that we are holding this debate, 47 years after it was enshrined in law, in this very house, that women should be paid the same as men for doing the same job.
In fact, whist the gender pay gap is at its lowest, if the gap continues to close at the same rate as it has since 1997, it will take until 2053 to achieve pay parity.  I will be 80.
The Government asking organisations over 250 to publish their gender pay data is too little, too late.  The government must look at the barriers that face girls and women at every step.  At school.  At college.  At work.  And in society at large.
So, pay women the same because it’s the right thing to do.  I want to talk about the contribution pay parity can bring to business success – and some of the additional barriers that face women in their career.
Whilst female CEOs are on the increase, there are far too few.  There are more women on boards, but not enough.
Whilst the burden for childcare still falls largely to women, many women feel trapped.  And the increasing ageing population will only increase the responsibility of caring for women.  Childcare costs are up 33% since 2010.
There are currently 2.4million women in the country who want to work, but cannot.  For a variety of reasons.  Yet, in the UK there are 600,000 unfilled jobs.
I will outline, in my speech, that publishing data is not enough.  The Government must outline a clear roadmap to speeding up the route to pay parity.  I cannot wait until I am 80 – and my own daughter, who is 15 months old – will not, I believe, wait until she is 38 to be paid the same as her male nursery friends.

Alternative approaches to the 9-5
How many of those unfilled roles, could be done by women, working at home, flexibly around their family responsibilities?    How many women are limited in their career choices by stereotyping, from an early age.
Where is the government’s initiative to get more female role models into schools?  Why is it that prominent business women describe being treated as royalty or as aliens, when they return to their schools, to talk about their successes?  And why is it that in 2016 a request to work part time is still seen as indicative of a lack of ambition.
One of my heroes, Dame Stephanie Shirley once employed 2,000 women all working from home on coding and software design.  Working on exceptionally serious and important government contacts, including writing the code for the black box for Concorde.
Dame Steve, as she liked to be called set her business up in 1960 when a woman needed her husband’s permission to open a bank account.  She thought if she called herself Steve she might get more business, than Stephanie.  Dame Stephanie went on to build a hugely successful tech business, largely run by women, which made them and her millionaires.  She once remarked, ‘you can tell ambitious women by the shape of our heads.  They’re flat on top from being patted patronisingly’.
The government must ask businesses to make every role available to flexible working.  Vodaphone recently rewrote every single one of its job descriptions so that it can be undertaken as a job share, or part time.

Contribution to business
From February 1st until 31st December 2015, I was President of the Chartered institute of Public Relations, a position I was proud to hold, not least because I started my year one month late, as I completed by maternity leave.  But in the year I was President, the CIPR published evidence of a £8,483 gender pay gap.
The figures had been analysed and reanalysed and I was and still am deeply embarrassed to be president of professional body that pays its women almost £8,500 less than its men for doing the same job.
Let’s be clear, the gender pay gap within public relations exists were two people undertake the same role, at the same level, and the woman gets paid less.
I applaud the Government for asking companies to publish their data on gender pay.  But it is not enough to publish statistics.  If companies just give an overall figure, not figures tier by tier, I believe they will defend their own statistics by saying the comparisons cannot clearly be made.
Earlier in January 2016, in the House of Lords, Baroness Wheatcroft introduced a debate about the contribution women have made to business.  Women with significant business experience and major success spoke in that debate, including Baroness Brady, who cited the gender pay gap as one of the barriers for women getting into more senior positions in business.
But my main point this evening, Ladies and Gentlemen, are pay women the same because it is good for business.  The Women’s Business Council has calculated that if we equalise women’s employment to that of men by 2030, we can add at least 10% to GDP.
Closing the gender pay gap, is good for business.  It is good for Great Britain.  But merely publishing information is not enough.
Business must have a clear approach, timed, detailed approach to closing their gender pay gap, improving the number of women in senior positions and by so doing they will return more investment to their shareholders.

A roadmap
In the 1990s, I worked for the BBC.  I was an active member of our trade union, BECTU and after a discussion with a female colleague, we thought it would be interesting to ask my colleagues for four pieces of information, their job title, gender, salary and time served in that role.  Two senior producers, 15 years in the BBC and five each in their roles had a  £13k pay differential.  The only difference?  One was a woman, one a man.  We put the league tables on the back of the toilet doors.
The BBC said that it would not discuss salaries as it was personal.  Those two senior producers marched into the head of departments office together and demanded change.
The gender pay gap is not a problem for women.  It is not a problem for me.  It is a problem for the UK, for everyone.
The Government’s own Equalities Office undertook research in 2014, which showed that the majority of employers considered ensuring they have no gender pay gap is a priority (yet, some do not, clearly).  But only a small proportion had a planned approach for reducing the gap.
So, the government is asking companies with more than 250 staff to publish their pay according to gender.  That lets almost every PR agency off the hook and we know that more women than men work for SMEs – so they too are off the hook.
What’s the point in asking larger organisations to publish data, without there being any action to follow?
Publishing data, says the Government’s own consultation….’many employers will be encouraged to establish an effective talent pipeline that helps women to fulfil their earning potential’.
Oh, so now the data is published, it is up to the women themselves to ‘better themselves’.
Unfortunately, the data already published is not encouraging to women to ‘fulfil their earning potential’ – the largest gap comes with seniority.
The TUC not known as a voice of business, said that amongst the top 10% of earners in the UK, the gender pay gap is 45.9% and for the top 2% it is 54.9%
So, the government believes that publishing data will encourage us to fulfil our potential.  To earn more, but still substantially less than our male counterparts.
We must have a roadmap – that starts at the very beginning, as all journeys do with one step.  The first step on this journey is not about equality.  It is about equity.
It is not about creating a level playing field.  Because whilst I understand the rules of a cricket match, the man stood next to me may not.  We must explain the rules every step of the way.  We must be clear on what is possible and what is not.  We must support each other; we must defend each other.  We must help each other.  And if it’s necessary we have to do it over and over again.  Some of us will need less help, some of us will need more help.  Some women will need everything re-explaining many times to overcome the background story they have been told – to expect less, work less, be paid less.

Conclusion
Another one of my heroes, the inspirational politician Madeline Albright said ‘there is a special place in hell for women who will not support other women’ and I believe that.  I commend the Hansard report of the debate in the House of Lords to you all.  In action are a group of high profile business women, from across the house, calling for changes that are far deeper, far more wide reaching, than merely bringing out an excel spreadsheet with a blue line and a pink line for men and women’s salaries.
Together – men and women, parents and those without their own children, politicians and citizens, accountants and public relations professionals, lawyers and football players – we must all support women to equity; at all times.
Companies must do the right thing.  For their own economic success, the research is clear, an equitable business is a more profitable one.  And because it is morally right.  Graphs and stats will not go anywhere near far enough.
I want to be able to stand outside, or preferably inside, this house when I am 80 and raise a glass with my daughter to the distant memory of a gender pay gap.  I do not want to be celebrating pay parity in 2053; it is not fair and it is not right.