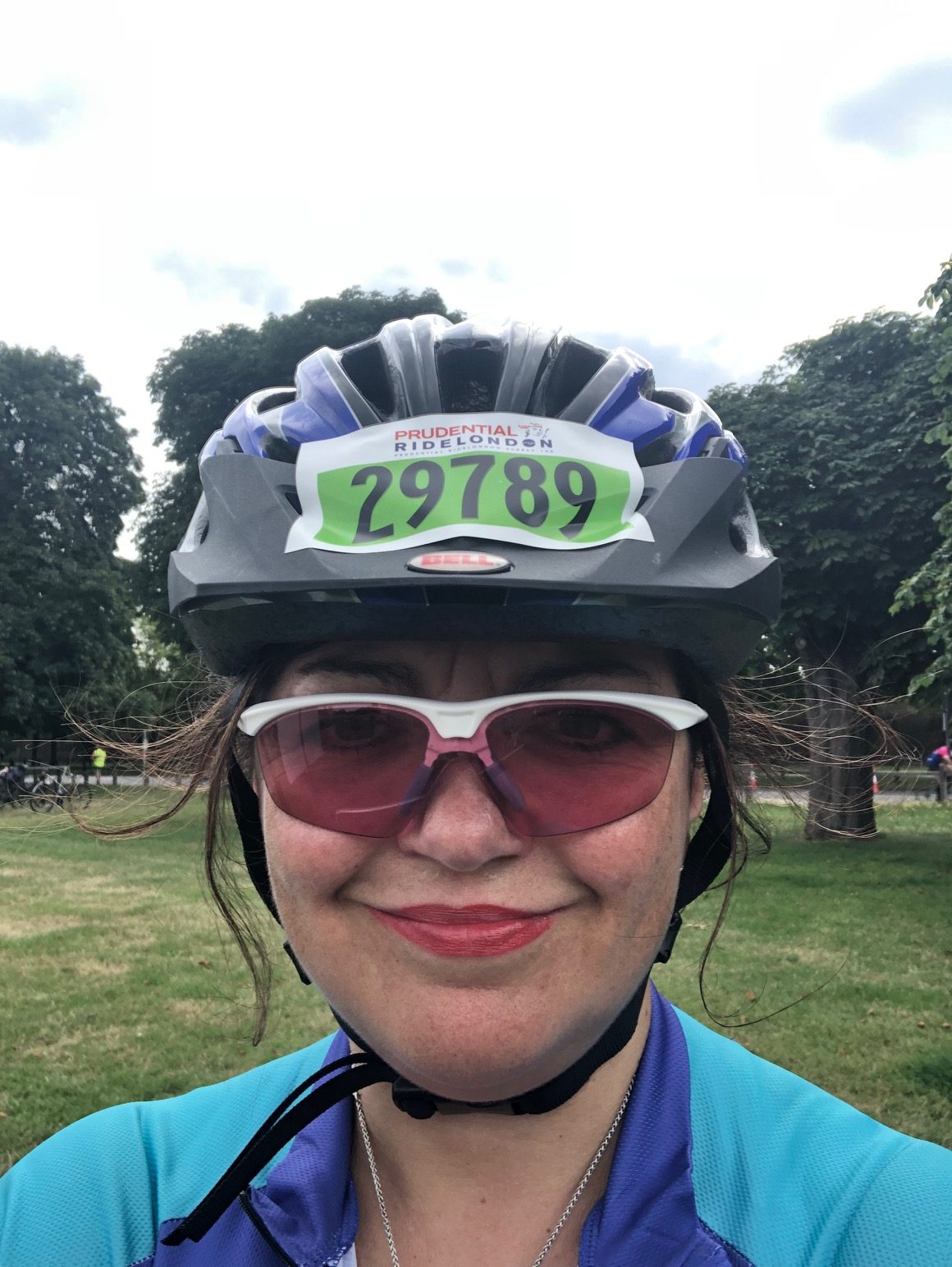 On Sunday I undertook the biggest physical challenge of my life. I took part in The Prudential Ride London 100 miles.

I did it for a very special young man, son of my inspirational friend Rachel Miller.

Rachel and I met some six or seven years ago and we’ve been firm friends ever since. She was pregnant with her twins when I was pregnant with #miniteampg. I am godmother to the twins, but in amongst the joy and exhaustion of new babies, it became clear that one of the gorgeous new boys had a heart issue.

All now resolved, thanks to the amazing care and skill of the team at Great Ormond Street Hospital. So on Sunday John and I cycled 100 miles (well a little less as Box Hill was closed, more of that later) and raised almost £2,000 for GOSH. I really want to get to £2k, so if you have a fiver please do consider donating it here.

So let me tell you a bit about Sunday. On Saturday night I had a terrible night’s sleep. I had every anxiety dream imaginable. And our hotel seemed to develop every type of noise you could think of.

The alarms went off at 0500 and we shot out of bed. Showered, changed, copious chamois cream applied, GOSH cycling top on and we were off to cycle the seven miles to the Olympic Park. The sun rose over the Thames and it was beautiful.

I was terrified and very emotional. I would not and could not fail. But I have never taken part in a mass cycling event and I did not know what to expect.

I have run in two half marathons, countless 10ks and a sprint tri; everyone is chatty and helpful, welcoming and supportive and you even get to chat sometimes on the way round.

My experience of this ride was different. I rode it with my husband, who is the best person I know and without him there is simply no way I would have got around. Of that I am clear. His stoicism and patience are amazing. I didn’t know if I would (!) but I love him more after this shared experience than I did before.

“Move over, coming up on your right” – the first time I heard it I dutifully moved over, what came past me – five men on super duper bikes going at the speed of light – was awesome but also frightening. What if I hadn’t got out of the way in time? Blimey.

But John reminded me that we were going at our pace (this was actually factually incorrect as we were going at MY pace, which is a lot slower than his….see above note re super duper chaps above, John’s bike and he had much more capacity, though never in that modus operandi). And I mentally regrouped and carried on.

Sport and exercise are still relatively new to me, in September 2016 I had done no serious exercise as an adult and then I learnt to run with This Mum Runs. It’s changed my life. But sport is supportive and non-competitive for me (I only compete against myself). So to be faced with groups clearly wanting to get ahead, at a super speed, was a bit unnerving.

At mile 25 I felt great. After the first mahoosive hill, I was tired. After the second I was exhausted.

There were three major accidents, caused by cyclists not communicating well and serious pile ups (one of my cycling friends has since said she will never forget the accident she saw) we do hope folk are well.

I was a bit spooked by the news each time and prayed very very hard that I would keep myself, and John safe. We had to wait each time for the ambulances to come through, the injured helped and the road reopened. Twice this was on very narrow roads and I did not like the congestion one jot.

Due to the major delays (we reckon we spent an hour and 45 minutes waiting in all) the organsiers closed Box Hill. I was delighted. Others not so, feeling they were missing out on the full challenge.

But by mile 90, at the final drinks stop, I was praying very hard for it to end. Soon.

Everything hurt, my bottom, my left foot was a bit numb, my shoulders ached, my hands were tense from being in the same position. I just wanted to get off. I cheerfully announced that if I could order a cab I would. So I prayed some more. But this time I thought of these amazing people:

My friend Paula who was doing her second half ironman length tri that day.

An amazing friend who is being treated for cancer.

My dad, home with his foot up, unable to walk and I knew thinking of me minute by minute.

John and his unswerving faith that I could finish this

Many of the women I have met through running who have gone on to do more than they ever thought they could.

But mostly I thought of Rachel and Jon Miller and their amazing family (who were also watching us minute by minute and looking after #miniteampg). I remembered the day I visited JM (my godson) post his op and Rachel and I cried and cried with relief that he was going to be well. By mile 91 I resolved to go as fast as I could to get off this bl**dy bike and get my hugs and smiles from them.

John has taught me about the power of the bigger back cog and me and that gear are now best friends. Into it I went, down and up went my v v tired legs and John paced me all the way to mile 100, when I shot over the finish line, I announced ‘can I stop now?’ John held my hand and I cried.

I am never ever cycling 100 miles again. But I am superbly proud that I did.

I will do a marathon before I am 50 and I did see a gigantic medal that you get if you complete the 100 mile bike ride, the London Marathon and the two mile swim in the Serpentine…….(I hate swimming)

And this, reader is why. With kind permission of Rachel and Jon – me and my godson, the well, the smiley, the funny, the robust JM: currently in France basking in some fabulous family time. I love them all so much and I am so proud of our achievements. We are all superwomen and men.